skip to main | skip to sidebar

How is snowboarder Kevin Pearce handling his TBI? 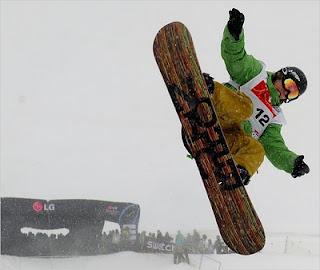 I can't believe it's already been just over one year since Kevin Pearce was injured when he hit his head on the edge of a halfpipe while snowboarding in Park City!

There's a nice article in The New York Times that gives an update on his recovery. Here are two quotes that I can relate to oh-so-well . . .

"Pearce said he was having a harder time than others were in seeing improvements in his brain function." (I think most TBI Survivors remember who they were and what they could do pre-injury, so this makes it difficult to recognize improvements because you are always comparing. Yeah, so I just wrote that in the third person, when really I'm talking about myself "I remember who I was and what I could do pre-injury . . .")

"As the morning wore on, Pearce mentioned taking a nap. He wanted to be ready for this week’s broadcasts, and all the travel had drained him." (I feel for him. Any brain activity wears.me.out. Sometimes I feel like an infant, the way I have to take regular naps)

Click HERE to read the entire article
Posted by Jennifer Mosher at 4:05 PM

Sometimes it seems All I do is sleep. It is very depressing sometimes. I just have to remember it's how I take care of myself now.

All about my life with a Traumatic Brain Injury

Jennifer Mosher
Salt Lake City, UT, United States
Along with approximately 5 million other Americans, I live my life with a Traumatic Brain Injury resulting from a car accident. This blog is a way to document my experience as I learn my physical, emotional, and neurological limits. I hope to help other TBI Survivors along the way. I'd love to get your feedback (comments!)